Geometry is always fun to teach in elementary. Students feel liberated by not having scary three digit numbers flying around. Shapes you can bend, stretch, fold, connect and transform; not everyone is comfortable with bending, stretching, folding, connecting and transforming numbers yet. You can prove claims by cutting things and moving pieces around. Students have a lot of first hand experiences with the shapes world, they have a lot of ideas and opinions about it. They are not afraid to step into this world, they feel at home in it.

After my teaching partner discussed the attributes that separate the polygons from other weird flatland creatures, we decided to focus on reviewing our polygons vocabulary and refining our understanding of the attributes of different polygons.

We started with the lesson shamelessly stolen from Graham Fletcher Where is Poly? An Exploration in Geo-Dotting. Here is the picture of the prompt that we used. 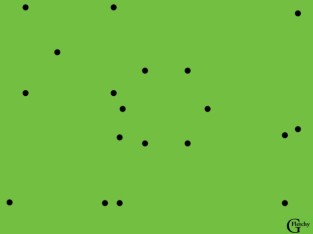 Students engaged in a dots scavenges hunt, shared their ideas on the SMART board, everything was going pretty similar to the original lesson. Many students noticed that if you connect some of the dots, you can make a hexagon in the middle. When one student started connecting the dots, the running commentary was as follows: “It is a hexagon because it has six sides, six vertices, it looks like a circle, and all sides are equal.” This last part caught my attention.

I drew a triangle with obviously not equal sides. We all agreed that it is a triangle. I drew a wobbly quadrilateral. While the students have just recently learned this word, they identified that it is “quad-something because it has 4 sides and vertices”. I drew a bowtie looking hexagon. I have never seen my class agreeing so unanimously with anything before; this was NOT a hexagon.

I had a moment of weakness when I was about to turn around and announce that it is, and then explain how it works. Instead I told my students that we will investigate it later. 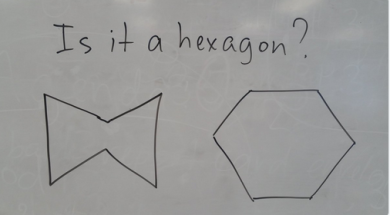 I took a picture and on my recess got to twitter. It’s not the worst way to spend recess. This was the idea I was looking for.

@TAnnalet @Simon_Gregg I might ask student to identify all hexagons in the photo here: https://t.co/pULB6cCNZw

Instead of just taking a photograph I decided to make some sorting cards for my kids and it was a good excuse to spend my evening playing with the compass and pretending I’m working. I narrowed the set down to fifteen trying to find the hexagons that would cause the most confusion. I anticipated the responses for each one of them. I was close.

Here is the picture of my hexagons and my students’ descriptions of some of the shapes. See if you can match them.

I gave students the cards and asked them to find hexagons, put them into a “hexagons” pile and try to describe what makes them hexagons. After about 10 minutes of logistical hiccups (“I need a pencil sharpener!”) and discussion, we put all the attributes on the board.

“This is a hexagon because hexagons usually look like honeycombs.”

“Hexagons always have even sides”

“If you cut it in half it will be the same on both sides.” (I think we are talking about symmetry here).

“If you cut a hexagon in half, it will have one, two three, four sides, it will be a trapezoid.” (Did not see this one coming, and kids really picked this one up, one of the last attributes they dropped.”

“The sides should not go into the middle, they should be either straight or go out.” (No tucked in sides)

“All angles are the same”

“All sides should be parallel”

“It shouldn’t have sharp angles” 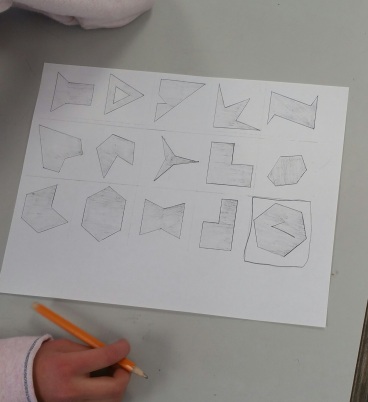 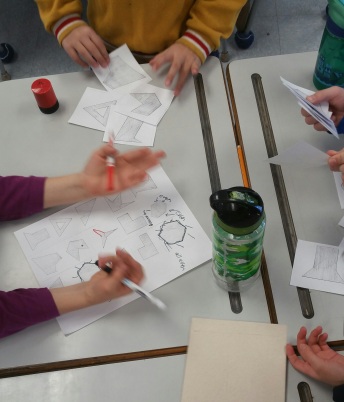 I find it fascinating how this conversation jumped all around K-6 geometry curriculum, and students made some observations that they don’t need to officially approach until grades 5-6. I think it takes care of some concerns that more student-centered lessons might not be the most efficient way to cover the curriculum. Actually, they are.

We looked through all the attributes, and found that there is only one hexagon that fits them all, the honeycomb one. Then I told the students that there are more than one hexagon. They went off back to their groups to decide which attribute they might consider dropping to allow more shapes to join the hexagons ranks.

After the second round we had 3, the regular one and the slightly crooked “honeycombs”. The attributed of equal sides was dropped first.

Here is when the real fun started. A few shapes were so resembling triangles and rectangles that reasoning through attributes was coming into conflict with the shape intuition. This triangle is just missing a little piece, if I put it back it will be a perfectly fine triangle again, even with six edges and vertices it is way closer to regular triangle than to the regular hexagon.

These conversations made me wonder: If our geometric vocabulary is usually develops through the context of regular shapes, do we subconsciously allow the attribute of “regularity” to take over everything else? 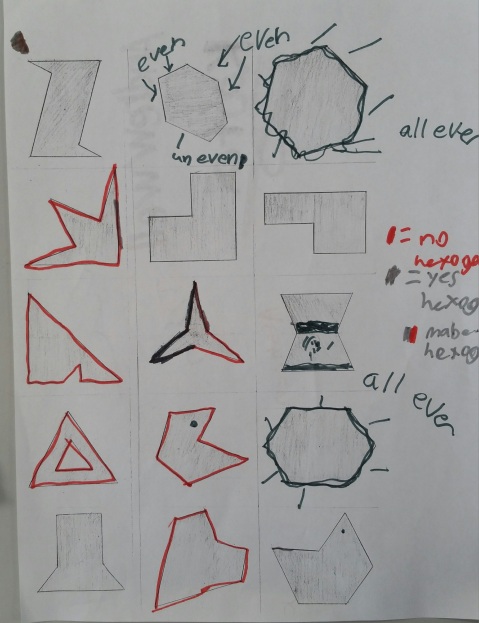 We made a few more rounds of dropping attributes and adding more and more hexagons to the family.

“I have an idea! I think they are all hexagons!” This idea was appearing around the table groups and spreading around the classroom. One student came to me, “I think the pentagons might be like hexagons, all different. And other shapes too.”

My goal was to have a conversation about the properties of the polygons without me being on the spotlight. I did not anticipate hexagon being a topic for such a passionate debate for 8 year olds that couple of groups required my intervention to direct students from speaking at each other to speaking to each other. While everyone had some aha moments, I am not sure everyone is equally convinced, but I think I can work with it. I also loved how students started extending their ideas to other polygons, and I plan to use their ideas to shape my next lesson.

I think I want to make a WODB with 3 pentagons (2 “weird ones”) and one funky quadrilateral. Or maybe bring in a hexagon friend. This will be another fun filled evening because I don’t remember how to construct a regular pentagon with the compass.

Special Thank You to

Graham Fletcher for Geodotting lesson, it was engaging, interactive and brought up a lot of vocabulary

Zak Champagne for a great session Talk Less Listen More in Effective Practices for Advancing the Teaching and Learning of Mathematics online course in Mount Holyoke College. You are responsible for my “shut up don’t say it” moment that lead to this lesson.

6 thoughts on “There Are More Hexagons Than You Think”