Discussions and arguments about definitions were defining features of week two of our hexagons explorations. I found it was a challenging week for me to manage because my students’ wonders yet again went places. Simon Gregg and Christopher Danielson were supporting me along the way, and I feel like they were part of the conversations that happened in my classroom last week. #MTBoS at its finest.

Which One Does Not Belong?

After realizing that there are, indeed, more hexagons than you think, I wanted to prompt my students to start focusing on particular properties. Not surprisingly, Simon already had a shapes WODB ready for the cause with four not obvious hexagons. I could anticipate some of the responses (like identifying a regular hexagon), but I was not sure what my students will make of the red and yellow shapes. I was underestimating my kids.

At some point, students started comparing the shapes to the real objects and getting really sidetracked with it. I asked them to get back to focusing on properties. Things I should’ve asked instead: What makes it look like a hammer? What makes other shapes not look like hammers? Those observations that students made were not irrelevant, but I failed to connect their relevance to the goals of my lesson.

I’ve noticed that students had a lot of observations around composing and decomposing shapes, and after discussing it with Simon, I’ve decided to continue with tangrams hexagons challenges.

The Rules: Build a hexagon with 2 tangrams. Call a teacher to take a picture. How do you know it is a hexagon? Proceed to 3, 4, 5, 6, and finally 7 tangrams. Is it possible to build a regular hexagon with tangrams?

I also decided that it was the right moment to introduce some formal vocabulary like concave and convex to define “tucked in” vertices more conventionally.

Here are some of our hexagons. 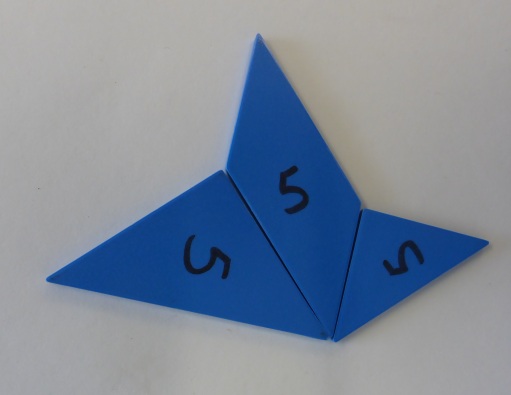 And then there were some different ones.

Students kept building these funky shapes, and I had to admit that I am not certain how to count the edges and vertices on them. My students weren’t certain either. In our table groups, these shapes caused a lot of discussions. I took a few pictures and asked  for now to stick to the polygons that don’t look like their edges self-intersect. Then I called Christopher and Simon for help.

How do mathematicians agree on definitions?

After looking through a chapter in Christopher’s teacher’s guide to his WODB shapes book, I decided to revisit the conversation about the definition of polygons. I brought back the pictures of shapes in question. We still did not have the agreement on what these shapes are. I told that we all had different ideas, and mathematicians have different ideas too. But the definition that many mathematicians agree on is that polygons are not self-intersecting.

Then one of my students asked this question: “How do mathematicians agree on definitions?” – “What do you think?”

I did not expect that almost every student had an opinion on that.

“They have a box, they write their arguments, and they try to convince each other. Then they agree on some idea. But the ideas might change later. Or maybe some parts of the idea.”

“They vote, but they have a debate first. People give proof and evidence to support ideas.”

“They write their theories and talk about them.”

“Someone comes up with the name and has an idea what this name means, then others discuss it and agree or disagree.”

“They have an argument and they prove to each other why their theory works.”

“In olden times in Ancient Greece people would come up with an idea, and then they would invite other people to discuss it and try to convince others and give proof.”

“They mix ideas together and make a new idea.”

I promised to interview some professional mathematicians and to share their responses with my students next week. Daniel Finkel and David Butler agreed to help and to share their thoughts on the matter, and on Tuesday I plan to bring their ideas to our classroom conversation. In the meantime, Simon Gregg made two more hexagons WODBs that can also be put to a discussion ( WODB#1, WODB#2). Also, I think I am ready to face “square is not a rectangle and if you turn it around it’s a diamond” challenge.

I struggle with giving definitions. There are always a lot of questions. There is always some disagreement on the properties that are deemed important. Where does the classification system come from and how do I justify it? My students offered me a solution. “After some discussions, many mathematicians agreed to call the “closed” 2D shapes with straight not self-intersecting edges polygons.” Then we can reason why. Sounds much more reasonable to me than “Polygons are…”

And thank you again to everyone who helped me and my students to make some new ideas.

2 thoughts on “Mix Ideas Together and Make a New Idea”